IAS 36 ‘Impairment of Assets’ provides the core principles when assessing if an asset should be impaired. However, due to the complex nature of the guidance, the requirements of IAS 36 can be challenging to apply in practice.

The articles in our ‘Insights into IAS 36’ series have been written to assist preparers of financial statements and those charged with the governance of reporting entities understand the requirements set out in IAS 36, and revisit some areas where confusion has been seen in practice. This article, Scope and structure of IAS 36, looks at the scope of the impairment review (ie the types of assets that are included) and how it is structured (ie the level at which assets are reviewed). 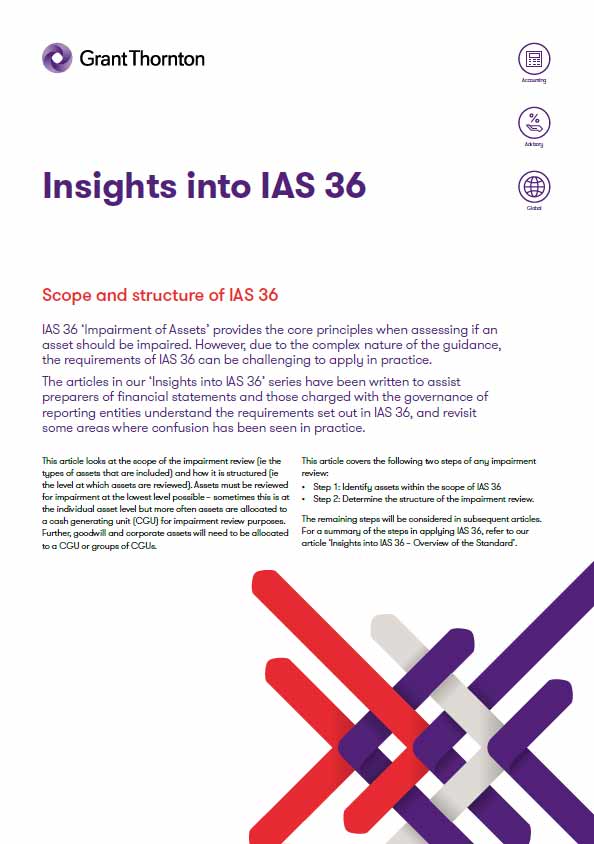 Assets must be reviewed for impairment at the lowest level possible – sometimes this is at the individual asset level but more often assets are allocated to a cash generating unit (CGU) for impairment review purposes. Further, goodwill and corporate assets will need to be allocated to a CGU or groups of CGUs.

This article covers the following two steps of any impairment review:

The remaining steps will be considered in subsequent articles. For a summary of the steps in applying IAS 36, refer to our article ‘Insights into IAS 36 – Overview of the Standard’.

Step 1: Identify assets within the scope of IAS 36

IAS 36 must be applied in accounting for the impairment of all assets, unless they are specifically excluded from its scope. The scope exceptions cover assets for which the requirements of other IFRS render an IAS 36-based impairment review irrelevant or unnecessary (eg – IAS 2 ‘Inventories’ requires that inventory be written down to its net realisable value if lower than cost, so inventory is explicitly excluded from the scope of IAS 36). The table below summarises IAS 36’s scope. 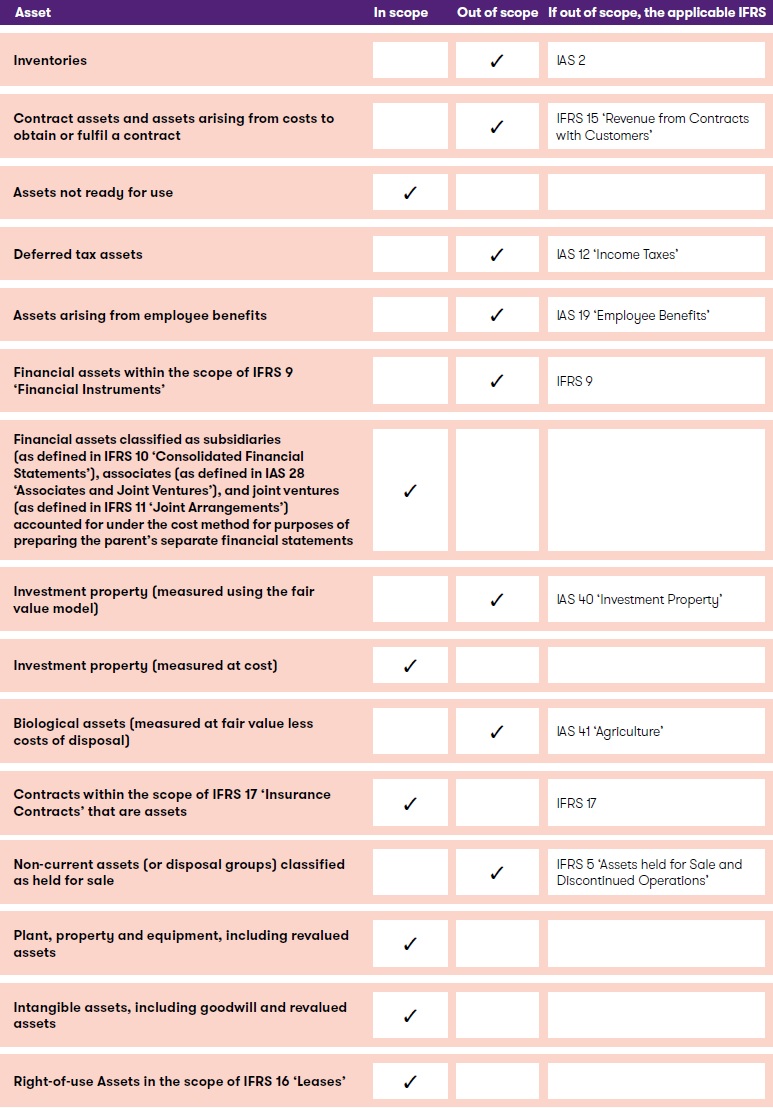 Other assets not specifically excluded in the above table are within the scope of IAS 36.

Step 2: Determine the structure of the impairment review

Once an entity has confirmed the assets in question are within the scope of IAS 36, the next step is to determine whether the asset will be reviewed for impairment individually or as part of a larger group of assets or CGUs (in other words, the structure of the impairment review for purposes of applying IAS 36).

When possible, IAS 36 should be applied at the individual asset level. This will be possible only when:

The below flowchart describes the assessment to determine the structure of the impairment review:

The following example shows how this guidance may be applied in practice.

IAS 36’s guidance on whether recoverable amount can be determined for an individual asset specifically refers to cash inflows, not net cash flows or cash outflows. Accordingly, if an asset’s cash inflows are largely independent but some of the related costs are interdependent with other assets, recoverable amount must still be determined at the individual asset level (if necessary).

B. VIU can be estimated to be close to FVLCOD and FVLCOD can be measured

From the above flowchart, if an entity determines the asset in question does not generate cash inflows that are largely independent of those from other assets, it should assess if the asset’s VIU can be estimated to be close to FVLCOD. The VIU of an asset may be assessed as close to or less than FVLCOD when the asset is no longer in use, or soon to be replaced or abandoned, such that the estimated future cash flows from continuing use of the asset are negligible (eg, where an entity holds a brand solely for defensive purposes). Further, VIU may be assessed to be close to FVLCOD in the limited circumstances when the entity’s estimated cash flows from using the asset are consistent with the cash flows market participants would expect to generate, and costs of disposal are not material (ie when there are no entity-specific advantages or disadvantages, including tax-related factors).

Finally, when there is no reason to believe that VIU materially exceeds FVLCOD, IAS 36 allows an entity to estimate FVLCOD only for purposes of determining the recoverable amount.

The following example illustrates one application of this guidance.

It is not possible to estimate the recoverable amount of the private railway on a standalone basis because its VIU cannot be determined standalone and is probably different from the amount it would receive on disposal (in part due to the high costs associated with disposal). Therefore, the entity estimates the recoverable amount of the CGU to which the private railway belongs, which could be the mine as a whole.

Most assets generate cash inflows only in combination with other assets as part of a larger CGU. It is not possible to calculate a recoverable amount for most individual assets that are held for continuing use.

Management must then identify the CGU to which an asset belongs to determine if quantitative impairment testing is required. The relevant guidance and application issues associated with this process are discussed in our article ‘Insights into IAS 36 – Identifying cash generating units’.

Read the next article in the IAS 36 series, 'If and when to undertake an impairment review'