As most of the Base Erosion and Profit Shifting (BEPS) Action Plan is made up of best practice recommendations rather than ‘red line’ requirements, it was always going to be applied electively and in different ways from country to country.

Yet implementation has already confounded expectations in the extent to which many of the optional recommendations are being embraced and fast-tracked by major economies worldwide. These legislative changes are set to have a significant impact on financial and operational structures, as well as effective tax rates.

At the same time, some of the BEPS actions that were meant to be universally and consistently implemented have stalled through lack of political momentum or international agreement on how they should be applied.

The adoption of CbC reporting in so many economies worldwide, including Canada, China, India, the United States (US) and the European Union (EU), means that BEPS – or at least one key area of it (Action 13) – is up and running. In all, more than 100 countries and jurisdictions have signed up for minimum standards that include CbC as part of the Inclusive Framework on adoption and implementation.

Governments and tax authorities have embraced CbC reporting as an opportunity to enhance transparency and promote greater information sharing. Buy-in from the US is especially significant.

ATAD 1 is bringing key aspects of BEPS into EU and member state law including CbC reporting, restrictions on interest rate deduction, common patent box rules and actions to address hybrid mismatches. Crucially, ATAD 2 takes this further by extending the reach of the curbs on hybrid mismatch to arrangements involving countries outside the EU.

Where BEPS is stalling?

Some aspects of BEPS are still subject to international consultation on how they should be applied in practice. Part of the delay lies in the technical intractability of some of the measures – hard-to-value intangibles being a case in point. There is still a lack of clear guidance in key areas of transfer pricing for Permanent Establishments and how profits should be attributed to foreign branches.

Where the OECD's Action Plan is splintering?

While one of the main aims of the BEPS Action Plan is to bring greater consistency to the tax rules for MNEs, the architects of the plan recognised the need for flexibility in adapting the measures to local tax policy objectives. But we’re already seeing much greater fragmentation than the OECD envisaged. Even in the area of transfer pricing documentation where the master file and local country file concepts are very clear and straightforward, some countries are adding their own tweaks and requirements, which could add unwelcome extra burdens on business.

Navigating BEPS - the road ahead

Implementation has a long way to go but patterns are beginning to emerge. The countries enacting the BEPS actions fastest are the ones feeling the most public pressure for tax reform. The BEPS actions at the front of queue are the ones that are likely to have the biggest impact from both a revenue generating and political perspective.

Is your organisation up to speed? A survey we carried out last year revealed that more than three-quarters of participating businesses had not changed their approach to taxation to take account of BEPS. Given the amount of strategic re-evaluation, financial restructuring and other heavy lifting that’s likely to be needed, it’s important to get into gear as soon as possible if you haven’t already. Equally urgent is the bolstering of tax risk governance and management needed to steer through levels of scrutiny that are increasing in both intensity and in cross-jurisdictional co-ordination.

It’s therefore vital that your business has a clear and comprehensive view of the road ahead on tax and the best way to navigate it. We can help. 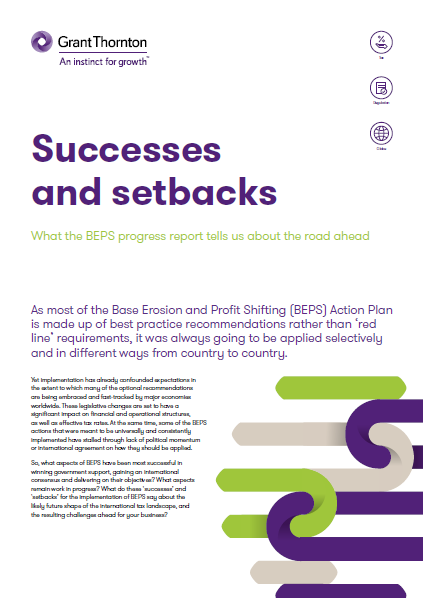