The G20 has endorsed the The Organisation for Economic Co-operation and Development’s (OECD’S) roadmap for resolving the ‘tax challenges arising from the digitalisation of the economy’. The reallocation of profits and minimum tax proposals that have emerged following a recent round of consultations could put an end to the arm’s length principle that has governed transfer pricing for decades.

After a slow and tentative start, the OECD’s push for a solution on how to allocate and tax the profits from digital business is gathering momentum.

Following consultations, initial proposals from earlier in the year have now been crystallised into a twin-pillar framework and a series of detailed options within it. With the backing of the G20, the OECD has also set an ambitious roadmap for reaching an internationally-agreed consensus by the end of 2020.

So, what is being proposed within the OECD’s programme of work and what are the implications?

This would extend the corporate taxable presence (nexus) from a physical ‘bricks and mortar’ operation to where value is generated virtually (eg online sales) or through the exchange of certain types of intangible assets (eg brand names or data-driven customer insights).

The allocation could be achieved using current transfer pricing, or alternatively, and perhaps more likely, through a series of simplified formulae. This simplified approach is however at odds with the arm’s length principle.

The proposed changes to taxation nexus will have to be coordinated with changes to local domestic law as most countries’ legislative framework currently requires some physical link with the jurisdiction.

GloBE seeks to compensate for diversion of taxable income from high to low tax jurisdictions by imposing a minimum tax. This could run up against existing tax treaties as it results in income earned in one state being taxed in another. The proposals would also effectively eliminate territorial taxation. Many countries could contest a measure that undermines their tax sovereignty.

Where does this leave us?

The number of countries that have agreed to implement key aspects of the OECD’s Base Erosion Profit Shifting (BEPS) Action Plan and incorporate them into their bilateral tax treaties suggests that some form of consensus on digital taxation isn’t beyond the realms of possibility. The appetite for consensus within digital taxation specifically is highlighted by the readiness of the UK and France to endorse the OECD roadmap and programme of work despite having struck out on their own legislative path.

However, the proposals could come up against local laws and interests. For example, the move to minimum tax can only be enacted if all states agree to a common tax framework. And even if a country signs up – and this is still very much an ‘if’ – it could still interpret and apply the rules very differently from others.

A lot of what materialises hinges on the US – if it fails to ratify, the OECD framework for consensus will be dead in the water. As the US has perhaps most to lose from proposals requiring it to share the tax it collects from its digital businesses, the question marks over its support are clear.

The other key consideration is whether some countries will balk at a radical and far-reaching set of proposals that go against both territorial taxation and the arm’s length principle. This would lead to considerable upheaval for both tax authorities and multi-national entities (MNEs). Mid-size MNEs could be especially affected, with the cost and complexity of compliance set to rise sharply.

So, should you sit tight and wait for all this to pass over? The short answer is no. The OECD’s proposals represent the direction of travel. Even if some of the controversial elements are reined in or dropped altogether, many and possibly even most countries will adopt some form of the proposals. The most important ramification is the death knell for the arm’s length principle as we know it – some of the threads will survive, but its universal application and the reasonable certainty that come with it will be gone. Some argue that the formulae that replace it could make tax management more straightforward. This must be set against the continuing fragmentation of taxation for digital business and the compliance headaches and risks of double taxation and dispute that go with it. And it’s all MNEs that will be affected rather than just so-called digital businesses at a time when digitalisation is permeating every sector. 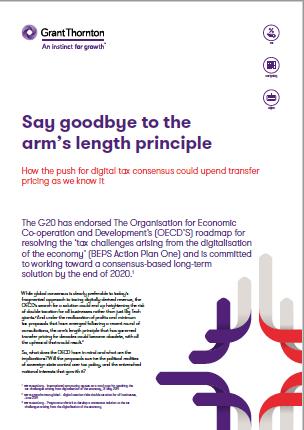